Everything from the mancave

Everything about vintage DOS based Palmtops goes in here...
Post Reply
106 posts

..no 3.3V - I am actually referenced in that Sven post by the way, as well as my original website! - I was an original adopter in 1995 and wrote a comprehensive case study on the wider usage of the PC3000 for Dip themselves. I used to go into their offices in Guildford and was the first person to be supplied with the Dip utility/prep software which most ppl now benefit from!

is still alive but here:

Confusing, since Sven posted the output from his linux machine which clearly claimed the working card "SDCFB-16-485" as 5.0 Volts. But yeah maybe it's a Linux bug or so? No idea how linux reads out the voltage anyways. Could also be a flag that is just configured in a wrong way? But let's just say I am surprised that Linux output is wrong. I'm not that deep into pcmcia specs, so I can't say much helpful stuff besides what I read on the web.

On an interesting side note - I found a website about the "poqet". Not that closely related to the PC-3000, but what I found odd was that the author mentioned it can utilize 3.3V Flash cards and 5.0 Volt SRAM cards. Having no clue about the pcmcia specs that baffled me, too. As a novice reading that you'd assume like "Well yeah that pcmcia slot just supports both voltages", but I guess there's some science behind it that I will never understand.

BTW: I tried to complete the list a bit - the canon 32MB (rebranded sandisk) and Kodak are from my own collection of CF cards, so only these 2 were added to the "good" cards to the original Sven list. Well better than nothing. I was once close to buying a huge lot of 200 old CF cards on ebay, but let's just say my wife kinda kept me from buying it.

Yes, from what I remember in the days of struggling to get affordable PCMCIA cards for the PC3000 I remember that SRAM work at 5v because they already have a battery charging their circuit. In 5v Flash cards, there is not enough voltage coming from the PC3000 to WRITE to the card in continuous streams, The writing also equates to initial formatting. ONLY the Sundisk branded cards of the time worked. Later SANDISKs also became patchy (some were earlier spec Sundisks rebranded).

Is amazing how only a few years ago you couldn't sell these old cards, now they are close to the prices I paid in the day! Also even old LOW capacity CF cards ~16mb are being toted as VINTAGE and COLLECTABLE/RARE!! 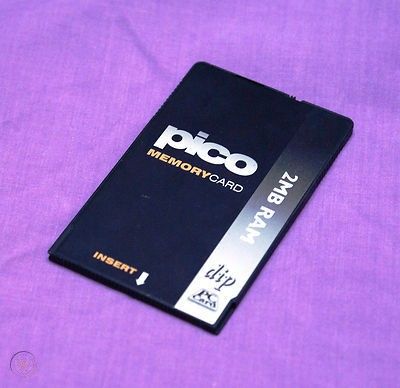 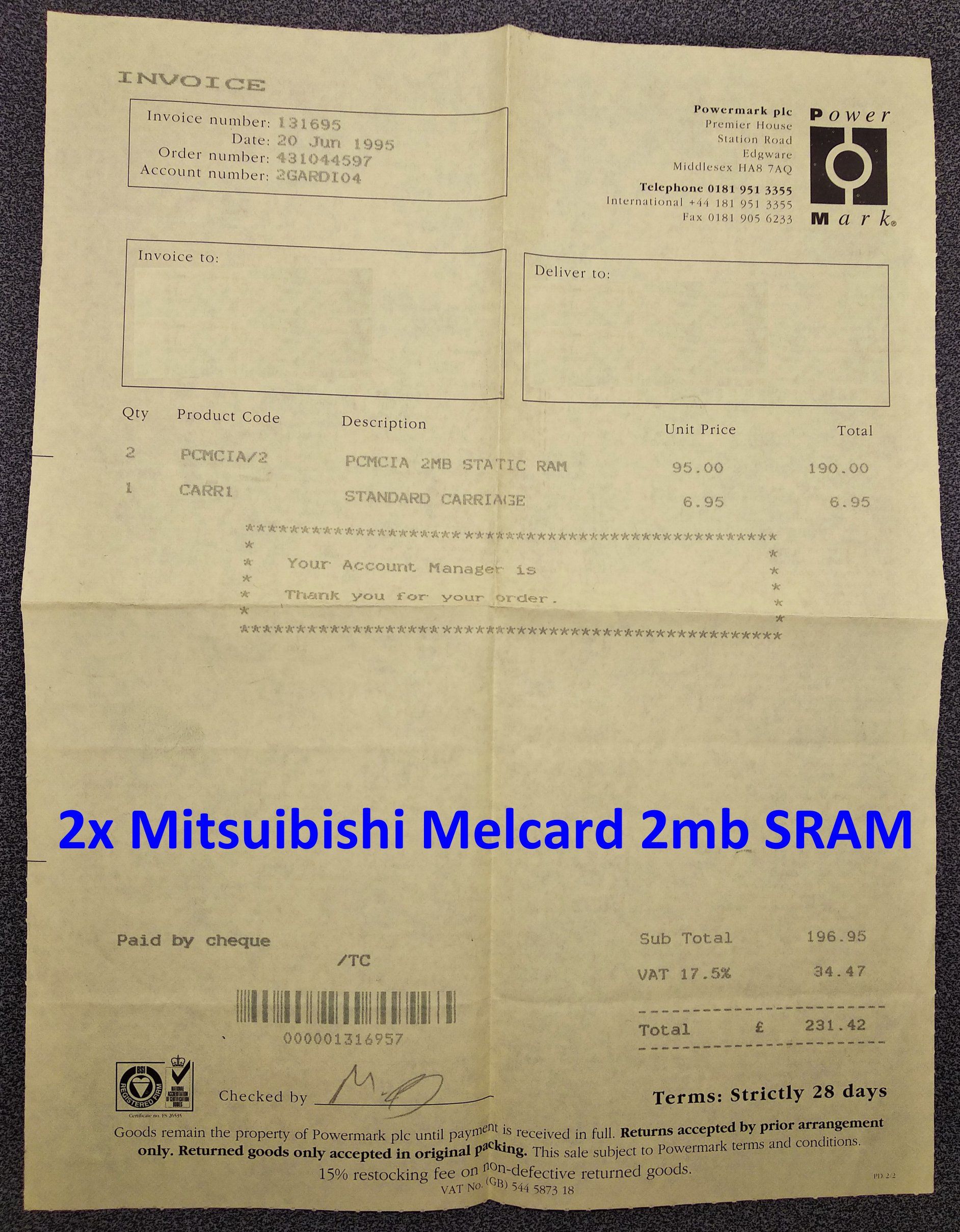 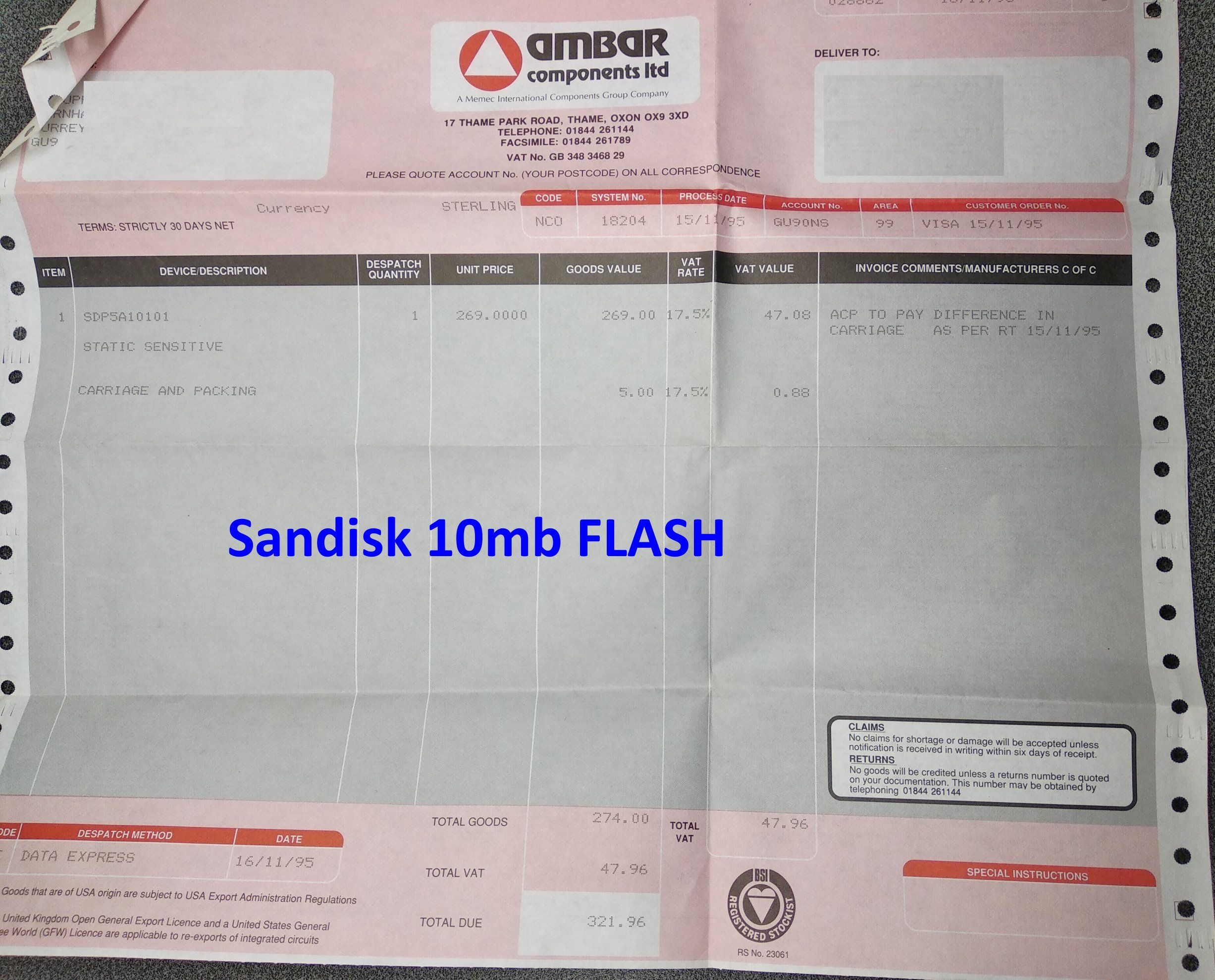 Hmmm, I never thought the battery in the SRAM cards would make such a difference, but now that you explain it it kinda sounds logical.

I wonder if the poqet used the same or at least very similar PCMCIA controller since it had the same problem.

Actually I have pretty much the same invoice from DIP - but not to me, I got it from some ebay aquired PC-3100 which came with the box, cards and the invoice.

Yes - I resented paying £40 for just 128Kb (!) at the time especially as I had forked out £38 for the user manual a bit earlier from them! BUT the problem with the PC3k was that finicky Laplinking and a realistic connection success rate of around 10% ONLY. This was exasperated by the fact where I worked and who I knew then only Amstrad 1512 5.25" only machines. So I had to find a further cable to go from serial to LPT cross over female - not easy pre Internet days! In addition I forked out for a Backpack 3.5" parallel floppy drive but still had to get that 12kb driver onto a dumb PC3k... The Sharp FDDs were around £480 if you could find one then. Dip only sold them WITH a PC3000 at around £980 a package.

BUT - I bought my PC3100 used (unused) for only £100 and it came with pocket modem and laplink cables because the company workforce couldn't live with the shortcommings out the box. The Backpack floppy was £179. I sold the 128Kb when I got the 2xSRAM and again sold one of the 2Mb SRAM when I got the 10MB Flash, so was some payback.

The guy that sold me the PC3100 also donated a dead PC3000 for nothing a little later and I have that as a spares unit if I need it. It actually just needs the EPROM reballing as is a dry joint. Potentially, this could be upgraded to a PC3100 if I could find the chip.

The short time-framed increased demand in memory was to be able to use the PC3100 in anger. I wanted to run WP5.1 so could exchange files with the company XENIX version of WP.5.1. I could run vs 4.2 off the floppy, but it had less graphic file ability and in the day, sexy WP was the preserve of Windows mainly, if you believed the press that is. Even the early Windows version of Worperfect wasn't as comprehensive of the DOS version, just looked nicer.

So when the PC3k was equipped with 2x2mB SRAM, I had the chance to stacker one drive to 4Mb and with integrated extended memory managers and all sorts of space saving file utils came the chance to try and load other extensive DOS apps and of course Windows 3.0. Windows however, in its lean fighting fit form takes up 11Mb on disk, so the 10Mb FLASH stacked to 20mb was the only way to go. Strangely, you'd never know the driver is stack'd as the speed for 10Mhz is perfectly acceptable and pain free.

So, my working setup in the day was: Windows 3.0/Word/Excel. WP5.1, Compuserve CIS, Bitfax, IRC/Telnet/FTP clients, masses of utilities, PKzips etc, memory setups for different apps when needed, couple of games, graphics exchange /converter/viewers. With stacker I could also stacker E:\ to 2Mb and the SRAM to 4Mb so had in effect 26Mb of storage. Should this all fall over due to failed batteries (Achilles heel), then there are setup files on floppies to just copy over and reboot for auto configuration. Luckily, all the files on the stacker'd FLASH are still there as are the SRAM (if good battery) so was very quick to get it all back.

So all this work came off being a simple ATARI ST Midi user who saw that technology superior to DOS and on a par with the MACs of the day. Thus, all my DOS and PC experience came from working with the PC3000 and a short while after, this experience got me working with the technology within the company setting up websites for Mitsubishi, Mannesman Tally et al, THEN - I then got headhunted for the post of UK PR Manager for Lotus (Notes)/IBM - (Mitsubishi were an early adopter of Lotus Notes so you can see the lineage). So thank you PC3k - you ultimately paid me back in spades!

I do remember sitting in a BA Executive lounge one day around 1999/2000 working away on it and all the Vaio users (THE first SEXY laptops of the day) coming over to ask what it was...

I miss those pioneering days when every day was a potential new way to work with it and every PC magazine was read cover to cover every month and all the Ads scanned for memory card deals! But the biggest buzz must have been having an email address in 1995, but then finding there was no-one in my world to email!
Top

You were for sure a power user of the Sharp back in the days. I got my first Laptop in 1998 - A small Toshiba satellite. I'm pretty sure it was stolen as the seller was that kind of dodgy drug dealer type and someone teared off the sticker with the serial number. But back then for 800 Deutschmarks it was the best I could afford since I was an apprentice and never really had huge savings.
Top
Post Reply
106 posts